Ukraine has been often called a laboratory when it comes to global challenges in the spheres of environment, information, and security. The site of the worst nuclear catastrophe in history, the primary target of the Kremlin’s troll farms and disinformation campaigns, the country to spark the collapse of the Soviet Union and to stand up to its neo-imperialist successor: Ukraine has been the first to face and, at times, set in motion processes that have worldwide consequences.

After Russia’s full-scale invasion has compromised the global system of security, the value of Ukrainian knowledge and experience can no longer be dismissed. The urgency to learn from Ukraine is now existential for the rest of the world. Ukraine Lab is a writing residency which has presented such an opportunity for six emerging writers from Ukraine and the UK (read curatorial introduction by Sasha Dovzhyk). 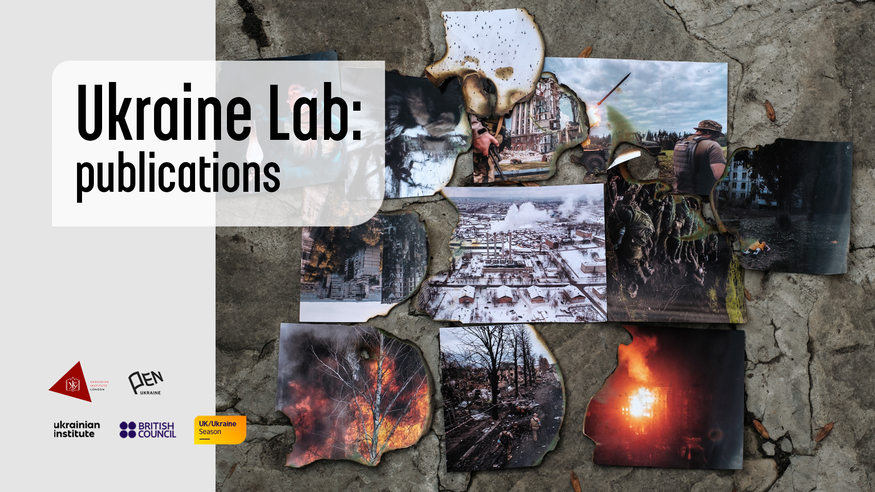 During six weeks in July and August 2022, Katia Iakovlenko and Jonny Turnbull, Sofia Cheliak and Kris Michalowicz, Olena Kozar and Phoebe Page have been working in cross-cultural writing pairs on their creative nonfiction pieces. We are proud to present the results of their work.

Kateryna Iakovlenko’s ‘Black, White, and Colourless’ tells the story of the war-ravaged industrial region in the east of the country through the elements that shaped it: coal, salt, and gas.

Jonathon Turnbull’s ‘The Kyiv Thickets’ drifts through the wild and weird green spaces in Ukraine’s capital that are brimming with political potential.

Describing the first days of the full-scale invasion, Sofia Cheliak’s ‘Ukrainian Lottery’ takes a look at those surprising Ukrainians who reject the ready-made model of victimhood and resist the enemy with a sense of humour and purpose.

Kris Michalowicz’s moving essay ‘Luhansk, Stolen’ reminds us that Russia’s war of aggression did not start on 24 February 2022 but has been raging on for eight years.

Set in an underground garage and at the receiving end of life-changing news during the battle for Kyiv, Olena Kozar’s essay ‘How Do You Know?’ is a poignant reflection on the effects of information overflow.

Exposing how our attention and emotions are manipulated, Phoebe Page’s piece ‘On Which Side?’ calls on the western audiences to discern Ukrainian voices amidst the noise of Russian propaganda.

October 25, 2022
2738
Journalists at War — Monitoring Russia's Crimes Against Independent Media (updating)
October 24, 2022
2670
People of Culture Taken Away by the War (updating)
August 1, 2022
680
‘It is not the right moment to try and understand Russians.’ Sophia Andrukhovych In Dialogue With Orhan Pamuk
July 27, 2022
530
‘Ukraine cannot negotiate its existence.’ Angelina Kariakina In Dialogue With David Patrikarakos
July 25, 2022
536
‘Ukraine plays a very important historical role in forcing the West to wake up.’ Serhy Yekelchyk In Dialogue With Mykola Riabchuk
Support our work