Purpose of the Prize

The award is designed to support and celebrate the collaborative work of translators from Ukrainian into the world languages, who open Ukrainian literature and the real Ukraine, reproduced in the texts of Ukrainian writers, to the world.

The Prize is awarded for

Submissions for the 2022 Drahomán Prize are accepted from October 24 to December 10.

The members of the Chapter have the right to involve experts (translators, linguists and literary critics, diplomats) to consult on the submitted nominations.

Procedure for determining the laureate

The laureate of the Prize is selected in three stages:

The name of the Prize laureate is announced annually during a ceremony in Kyiv, which takes place in April. Three finalists of the Prize are invited to participate in the ceremony.

The laureate of the Prize receives a statuette made by a famous Ukrainian sculptor, a cash prize of 3,000 Euros (including taxes), as well as additional opportunities to work and promote their work from the Ukrainian Institute and the Ukrainian Book Institute (participation in translation residencies, book fairs and literary festivals abroad).

Title of the Prize

Yuriy Prokhasko, translator, member of the Chapter of the Prize:

"We have an incredibly favorable convergence in the paradigm of Ukrainian culture, from which an exceptional semantic added value is taken, which would be a sin not to use. Etymological kinship of the term "dragoman" as a "translator, interpreter, mediator, (cultural) diplomat, craftsman, and servant of mutual understanding" – and the name of one of the leading figures in the canon of Ukrainian history of ideas – Mykhailo Drahomanov.

It is good if a knowledgeable contemporary can read all these meanings at once. But it is enough when at least one person speaks to him through this name: we are talking about translators. Especially since the concept of dragoman has circulation and is immediately reported in many world languages. Writing the name of this international award in Latin transliteration through the aspirational h only further emphasizes its Ukrainian origin." 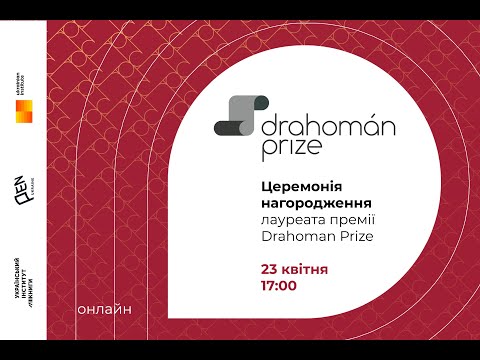