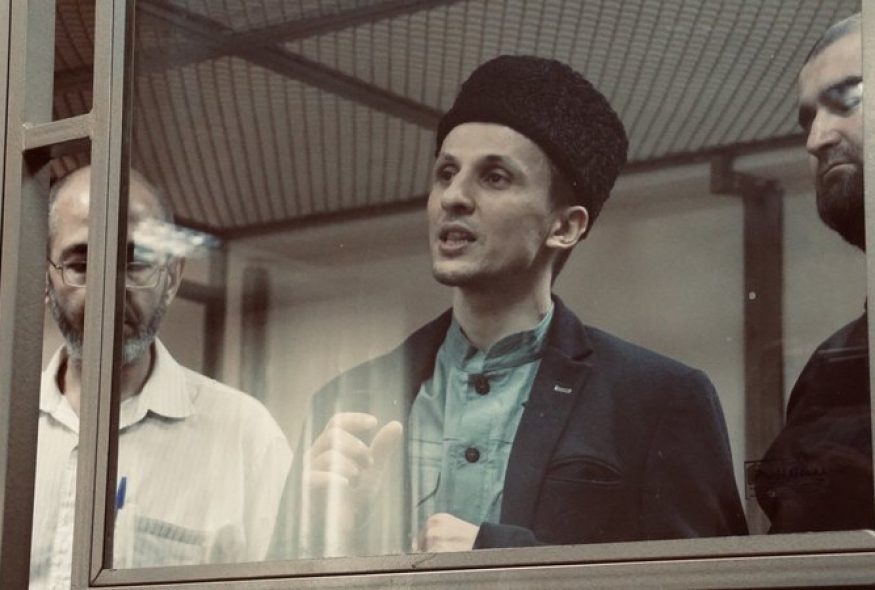 To honour the Day of the Imprisoned Writer, Anne Applebaum, Margaret MacMillan and Peter Pomerantsev wrote letters of solidaity to Server Mustafayev. He became one of the faces of the PEN International's 2022 #EmptyChairDay campaign. Server Mustafayev is a Crimean Tatar civil journalist, human rights defender, and coordinator of the Crimean Solidarity platform in Russian-occupied Crimea. He was centenced to fourteen years in a strict regime penal colony on trumped-up charges, and is not expected to be released prior to September 2034. You can express your solidarity with Server Mustafayev here.

I write to you from Poland, where Ukrainian flags hang in front of many shops and restaurants, and where millions of ordinary people have taken Ukrainian refugees into their homes. In recent months I have been to Washington, DC, where many embassies fly the Ukrainian flag alongside those of their own country; to Berlin, where the colors of the Ukrainian flag lit up the Brandenburg Gate in the evening; and to Taipei, where government ministers wear the Ukrainian flag in their lapels.

All of this support for Ukraine is also support for you, and for so many others like you. Millions of people around the world know that the war between Russia and Ukraine is a struggle between tyranny and liberty, between a vicious, brutal kleptocracy and a free, sovereign nation, filled with people who demand the right to speak and to write the truth.

You are one of those who has spoken and written with great eloquence, even under Russian occupation. Your letter to fellow Crimean journalists, and your call for a "non-violent, peaceful struggle against injustice" was read and heard. Don’t lose heart or give up, because your ideas and your vision of the future is shared by millions of people, inside and outside of Ukraine.

Thank you for your work. Remember that we are waiting for your return home.

You do not know me but I am one of the many people around the world who know of you and who admire you greatly for your courage in standing up to the lawless actions of the Russian regime. By contrast with it, you exemplify the highest human values and sheer decency. You have had to face the cruel and illegal actions of a government which both tyrannizes its unhappy people and makes victims of those such as you and your fellow prisoners from Ukraine and its occupied Crimea who have spoken out so eloquently and bravely for human rights, truth in journalism and freedom of expression. You also willingly took the risk of condemning the illegal Russian invasion and occupation of your beloved homeland of Crimea.

You have paid a heavy price for doing so and have had to endure the ludicrous procedures of the failing Russian legal system. You were charged with terrorism and planning to seize power by violence. You must have appreciated the irony of such charges coming from the Russian authorities. In your trial you were denied proper medical treatment when you fell ill and were forced to appear in court.

The sentence you received was vindictive and unjust and you are serving it in harsh conditions thousands of miles from your beloved family, friends and homeland. Such a travesty of justice and your treatment as a prisoner defies all human standards.

You may never see this letter but I hope that it may reach somehow reach you so that you know you have supporters who think of you with great admiration for your courage and who are working for your release. We salute you for your outstanding work and hope that your example will be a flame to inspire others. We need to remember your words: ‘It’s easy to break a finger, impossible to shatter a fist. United, we are invincible.’

Without people such as you in the forefront humanity cannot advance. Thank you from all my heart. I hope one day that we will meet in happier times.

Russia’s latest invasion of Ukraine has prompted huge amounts of people around the world to see Russia for what it is: an Imperialist, sadistic force bent on destroying human dignity and the right to self-determination. The Crimean Tatars have known this longer and deeper however, and have been fighting deeper and longer than most. You were the most dogged defenders of human rights in Crimea after Russia occupied the peninsula in 2014. The democratic world is now only catching up with the injustices you have been struggling against for so long.

You and your people tried to warn us who we were dealing with – too few listened.

I read about your absurd and wrongful arrest and imprisonment, the 14 year sentence for simply defending Crimean Tatars’ basic human rights, with both a sense of horror – but also a sigh of familiarity. Through the mass arrests murders and deportations of your ancestors by the Soviets as they ethnically cleansed Crimea, through to the arrest of Crimean Tatar human rights defenders today, the Kremlin has always tried to wipe away the memory, choice and culture of Crimea’s original population.

This is so typical of Russia’s rulers: they think they can remake reality, define history despite the evidence, break anyone. But they can’t break you and your people.

Over centuries the Crimean Tatars have proven that they are made of sterner stuff. In this too, you have been an inspiration to us all.

For too long we here in the West looked at the plight of the Crimean Tatars and thought it had nothing to do with us. But you were the canaries in the global coalmine. Now Russia is trying to turn whole world pitch black. The abuses that began with you have turned into a geopolitical gas explosion: Russia’s wars of aggression; countless war crimes; crimes against humanity; intent to genocide. Finally, the world has taken notice. Finally, some form of awareness is growing of why we have to stop them. We will know we have won when you and your fellow Crimean Tatars have been freed. The evil started with your oppression – and it will end with you too.

October 25, 2022
3267
Journalists at War — Monitoring Russia's Crimes Against Independent Media (updating)
October 24, 2022
1900
‘This Is My Country’: The abduction of Volodymyr Vakulenko
October 20, 2022
270
Ukraine Lab: Summary
October 20, 2022
313
Holding a Gun. An exchange of letters between Reginald Dwayne Betts and Serhiy Zhadan
August 3, 2022
1268
War Crimes Are Hard to Describe: War in Ukraine as Viewed by Foreign Photojournalists
Support our work