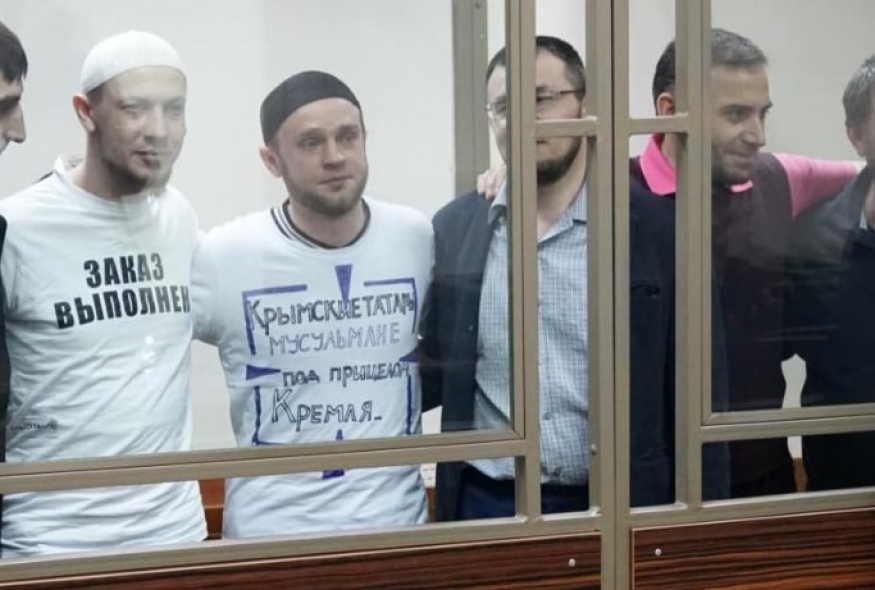 "Does it not strike you as strange that in the 23 years Crimea was under Ukrainian rule, there were no ‘extremists’ nor ‘terrorists’, and no ‘acts of terrorism’, but as soon as Russia arrived with its FSB, there was suddenly all of that?" The question was asked in his final address to a Russian court by Crimean Tatar human rights activist Emir-Usein Kuku, one of six Ukrainian political prisoners from occupied Crimea sentenced to horrific terms of imprisonment on 12 November on ‘terrorism’ charges without any crime.

There was nothing in this case that could remotely warrant criminal charges in a law-based democracy, and all six men - Muslim Aliev; Inver Bekirov ; Refat Alimov ; Arsen Dzhepparov ; Emir-Usein Kuku and Vadim Siruk - had long been recognized as political prisoners by the Memorial Human Rights Centre and as prisoners of conscience by Amnesty International. The charges all hinged on unproven allegations that the men were ‘involved’ in the peaceful pan-Islamist movement Hizb ut-Tahrir which is legal in Ukraine and most other countries. Russia’s Supreme Court ruling declaring it a ‘terrorist’ organization was handed down in secret and probably as a method of enabling Russia to send Uzbek asylum-seekers back to face religious persecution in Uzbekistan. No explanation has ever been provided as to why Russia alone has labelled a movement which is not known to have committed any act of terrorism anywhere in the world as ‘terrorist’. In occupied Crimea it has been increasingly using such cynical ‘trials’ and monstrously long sentences as a weapon against Crimean Tatar civic activists and journalists in particular, and against Crimean Tatars in general.

All the men, who have been imprisoned since February or April 2018, were charged either with ‘organizing’ a Hizb ut-Tahrir group (under Article 205.5 § 1 of Russia’s criminal code) or with (the lesser charge of) ‘involvement’ in this group (Article 205.5 § 2). Then in January 2017, the FSB suddenly added another charge of ‘attempting violent seizure of power in Russia’ (Article 278). The Memorial Human Rights Centre has noted on many occasions that this extra charge is often used against men who refuse to ‘cooperate’ with the FSB. All the Ukrainian Muslims arrested in occupied Crimea have rejected any such ‘cooperation’. It should be stressed that, as well as the preposterous nature of the charges against the men, Russia is in breach of international law since it is applying its legislation on occupied territory.

Although this was the second time Russia used its flawed ‘Hizb ut-Tahrir’ charges in occupied Crimea, the first had received far too little attention from international NGOs.. The gratuitous violence during the arrests on 11 February 2016 (of Aliev; Bekirov; Kuku and Siruk) and the fact that Kuku was a well-known human rights activist made the international community finally take notice.

Although Kuku’s previous persecution under Russian occupation is best known, there are reasons for seeing the arrests of all six men and the sentences passed by ‘judges’ Roman Viktorovich Saprunov; Dmitry Viktorovich Merkulov and Roman Vladimirovich Podolsky (from the Southern District Military Court in Rostov) as extremely cynical.

Muslim Aliev was the informal leader of the independent ‘Alushta’ Muslim Community which had on many occasions had come into conflict with the Muftiate of Crimea. The Mufti, Emirali Ablaev chose to collaborate with the Russian occupation regime and has been rewarded with semi-official status. Aliev’s family is convinced that it was his religious ‘dissidence’ that prompted his arrest.

The 48-year-old father of four was charged with ‘organizing’ a Hizb ut-Tahrir group, and sentenced to 19 years in a maximum security prison.

55-year-old Inver Bekirov is the oldest of the men. He was initially accused with the lesser charge of ‘involvement’. Then, on 21 August 2018, the ‘court’ in Rostov suddenly announced that it was proposing that the prosecutor change the changes against Bekirov to the more serious charge of ‘organizing’ a Hizb ut-Tahrir. Judges are not supposed to act as prosecutors, and Russian judges in such cases never act independently so it is quite possible that this was done merely in order to abort a trial at a point when the FSB torture methods used to obtain ‘evidence’ had just been exposed. It is also known that the FSB officer (and former Ukrainian turncoat) Alexander Kompaneitsev, who has played a malignant role in all these prosecutions and in the torture of supposed ‘witnesses’, had threatened to arrest Bekirov’s nephew, Refat Alimov, unless he gave false testimony, which he was unable to do.

He was sentenced to 18 years’ in a maximum security prison.

Emir-Usein Kuku had very clearly been persecuted for his human rights activities, with this earlier involving a sinister attempt to abduct him. On that occasion, on 20 April 2015, it is likely that the crowd who gathered in response to his cries for help saved his life.

He was sentenced to 12 years’ in a maximum security prison.

Vadim Siruk (30) is an ethnic Ukrainian convert to Islam, and his family are not alone in believing that he was arrested as a warning to other converts, and as an attempt to claim that Russia was not targeting Crimean Tatars.

He was sentenced to 12 years’ in a maximum security prison.

Arsen Dzhepparov (29) was probably arrested in April 2016 because he had refused to act as an FSB informer, providing false testimony against the men who had already been arrested. Dzepparov was then only 26, however he and his wife, Zarina, already had a small daughter. How could he ever explain to little Evelina what conscience and honour mean, he asked, if he denounced other men who also have families and children?

He was sentenced to 8 years’ in a maximum security prison.

Refat Alimov, at 28, is the youngest and the only man who does not have his own family. It seems extremely likely that he was arrested as Bekirov’s nephew.

He was sentenced to 7 years’ in a maximum security prison.

The indictment in each of the cases had essentially accused the men only of practising their faith, and the defence demonstrated time and time again that the ‘evidence’ had been falsified and the ‘secret witnesses’’ testimony could not be trusted. The ‘judges’ should have certainly acquitted all of the men, and were clearly aware of this since all of the sentences were lower than those demanded by the prosecutor, substantially so in the case of the four men accused of ‘involvement’.

These sentences will, of course, be challenged. Until the appeal hearing, the men will probably remain imprisoned in Rostov.

Please write to them!

The letters tell them they are not forgotten, and show Moscow that the ‘trial’ now underway is being followed.

Letters need to be in Russian, and on ‘safe’ subjects. If that is a problem, use the sample letter below (copying it by hand), perhaps adding a picture or photo. Do add a return address so that the men can answer.

[Hi. I wish you good health, courage and patience and hope that you will soon be released. I’m sorry that this letter is short – it’s hard for me to write in Russian., but you are not forgotten. ]

The men have been split up, with Aliev and Kuku in SIZO-4, the other men in SIZO-1 (the differences are small, so please copy carefully). The address each time, should have the man’s full name, and year of birth.