Is Putin going to let this Ukrainian protester die? 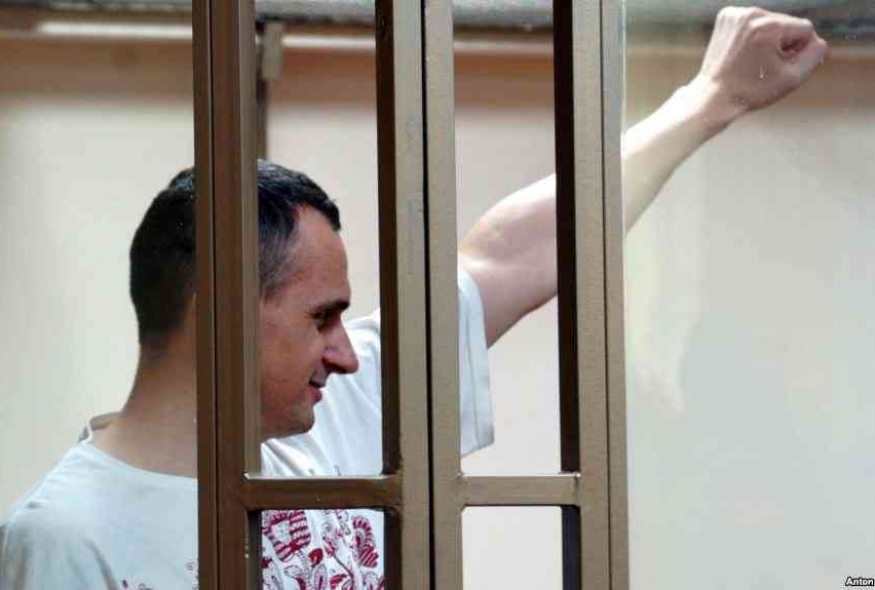 Summer Lopez, who previously worked eight years for the U.S. Agency for International Development, is the senior director of free expression programs for PEN America.

Oleg Sentsov has not eaten for 92 days. The Ukrainian writer and filmmaker, who was arrested by Russian forces in Crimea in 2014 and has since been serving a 20-year sentence based on unfounded terrorism charges, launched a hunger strike on May 14 to demand the release of 64 other Ukrainian political prisoners held in Russia. This 42-year-old artist and single father of two young children has put his life on the line for his fellow detainees. He has refused to ask for a pardon for himself.

As his strike enters its fourth month, Sentsov’s cousin, Natalya Kaplan, reports he has lost some 66 pounds off his 6-f00t-2-inch frame, and his heart rate has slowed to 40 beats per minute. Based on a letter she received from Sentsov last week via his lawyer, she posted a message on Facebook saying that Sentsov "wrote that the end is near – and he wasn’t talking about his release."

It is widely presumed that Sentsov’s fate lies in the hands of Russian President Vladimir Putin. There have been rumors that negotiations between the Russian and Ukrainian governments might result in a prisoner swap. But people close to the case report those prospects currently look dim; Russian authorities seem to have decided to let Sentsov die as an example to others.

Why would Putin elect to follow such a provocative course of action? Obstinacy is one possibility. Sentsov is a native of Crimea, the region Russia illegally annexed in 2014, and Moscow unilaterally declared him to be a Russian citizen. Allowing the filmmaker to be swapped along with other Ukrainian prisoners could be seen as undermining that legal fiction. (It was Sentsov’s outspoken opposition to the annexation that is widely consideredto have instigated his arrest and prosecution.)

Nonetheless, risking the death by starvation of a man whose plight has garnered global attention is a perilous political choice for any government to make.

In 2010, when Cuban activist Orlando Zapata Tamayo died after an 86-day hunger strike, it sparked protest actions in Cuba and was viewed as a significant setback in U.S.-Cuban relations. President Raul Castro took the unusual step of issuing a statement expressing regret over Zapata’s death.

One could imagine Sentsov was inspired by the example of Anatoly Tikhonovich Marchenko, a Soviet writer and dissident who undertook a similar hunger strike in 1986 to call for the release of all Soviet prisoners of conscience. Scholars view Marchenko’s death by hunger strike and the resulting uproar as a proximate cause of Gorbachev’s decision to authorizethe release of large numbers of political prisoners the following year.

Perhaps the best known example is the 1981 hunger strike launched by 23 Irish republican prisoners in Northern Ireland (most famously Bobby Sands), demanding to be treated as political prisoners instead of criminals. By the time the test of wills with British Prime Minister Margaret Thatcher was over, 10 of the prisoners had died. Some in Britain praised Thatcher’s response as a political victory, but in Northern Ireland it sparked fury; IRA recruitment grew and violence increased. The episode is now considered to have contributed directly to the emergence of Sinn Féin as a mainstream political party.

Should Sentsov die, the consequences are equally unpredictable. In Sentsov’s native Ukraine, where the media have been following his story closely, an outcry is inevitable; anti-Russian sentiment there will be further hardened, potentially increasing regional tensions. Activists inside Russia have risked arrest to publicly call for his release, inspired by his courage in the face of repression. It is conceivable that his death could trigger a broader wave of discontent with Putin’s leadership.

Yet Putin apparently feels emboldened enough – with an election and a World Cup behind him – not to fear the risks.

President Trump’s obvious disregard for human rights is probably contributing to Putin’s confidence. Although the State Department calledfor Sentsov’s release in a June statement, it has said nothing since. Trump has not uttered Sentsov’s name in public, nor raised any other human rights issues with his Russian counterpart, as U.S. presidents from both parties have traditionally done.

Putin’s imperviousness to criticism is nothing new, but the U.S. government’s total abdication of leadership on human rights in Russia is. Although others have stepped into the vacuum – French President Emmanuel Macron has reportedly raised the case with Putin previously, and reportedly did so again this weekend – Sentsov’s case may also signal how other despots will behave when they know that the leader of the world’s most powerful democracy will not speak out against their abuses.

Sentsov grows frailer with each passing day. Yet in a world where moral courage feels in dwindling supply, his fortitude and commitment to the fight against tyranny is a lodestar. In a letter from prison in 2017, Sentsov wrote these words about his participation in the 2014 pro-democracy demonstrations in Ukraine:

"The last time I went to the Maidan, where people had already begun perishing, my mother said, "Why are you going there? You have two children!" I answered that it was precisely because of that that I was going there – I don’t want them to live in a country of slaves."

We know what Sentsov is willing to sacrifice. What is Putin willing to risk?

July 13, 2018
364
It’s not my story… Serhiy Zhadan about Oleg Sentsov
June 18, 2018
376
Against Indifference
June 4, 2018
365
Russia is holding over 70 Ukrainian Political Prisoners of War
May 30, 2018
242
Russia goes into propaganda drive over gunning down of Putin critic Arkady Babchenko in Kyiv
May 26, 2018
266
“Movies cannot change things, but they can change individuals”. Askold Kurov's film on Sentsov's imprisonment
Support our work