The Prize Jury members and representatives of the founding organizations announced the short list of candidates for the 2020 Drahomán Prize during the press conference that took place in the Ukraine Crisis Media Center on March 30 at 2 p. m.

The award was launched in 2020 by the Ukrainian Institute, PEN Ukraine, and the Ukrainian Book Institute in an effort to support and acknowledge translators from Ukrainian into other languages. It is awarded for excellence in translation and contribution to the promotion of Ukrainian literature abroad.

The 2020 Drahomán Prize finalists are:

1. Claudia Dathe (Germany) is a translator working from Ukrainian into German. She coordinates literary translation projects at the University of Tübingen. In 2010, she initiated the establishment of the Translit association, which is dedicated to the dissemination of Ukrainian literature in Europe. For the Drahomán Prize, she is nominated twice with translations into German of Serhiy Zhadan’s poetry collection Antenna [Serhij Zhadan. Antenne], (Suhrkamp Publishing House) and Oleksiy Chupa’s novel Tales of My Bomb Shelter [Oleksij Tschupa. Märchen aus meinem Luftschutzkeller] (Haymon Publishing House).

2. Rita Kindlerová (Czech Republic) is a translator working from Ukrainian into Czech. She is a member of the Czech Association of Ukrainianists, the Czech Literary Translator’ Guild, the Czech Union of Interpreters and Translators (JTP), the Society for Modern Greek Studies, and the Committee for the International Panteleimon Prize in Literature and Arts. She edits the Ukrainian literature section of the online literary journal iLiteratura.cz. For the Prize, she is nominated with the translation into Czech of Volodymyr Viatrovych’s publicistic work Ukraine: Classified History [Volodymyr Vjatrovyč. Ukrajinské 20. Století. Utajované dějiny] (Academia Publishing House).

3. Katarzyna Kotyńska (Poland) is a translator working from Ukrainian into Polish, Ukrainianist and literary scholar. She is a professor at the Institute of Slavic Studies, Polish Academy of Sciences. In 2013, she won the Angelus Award for translating Oksana Zabuzhko’s The Museum of Abandoned Secrets. For the Prize, she is nominated with a translation into Polish of Victoria Amelina’s Dom’s Dream Kingdom [Wiktoria Amelina. Dom dla Doma] (Warstwy Publishing House). 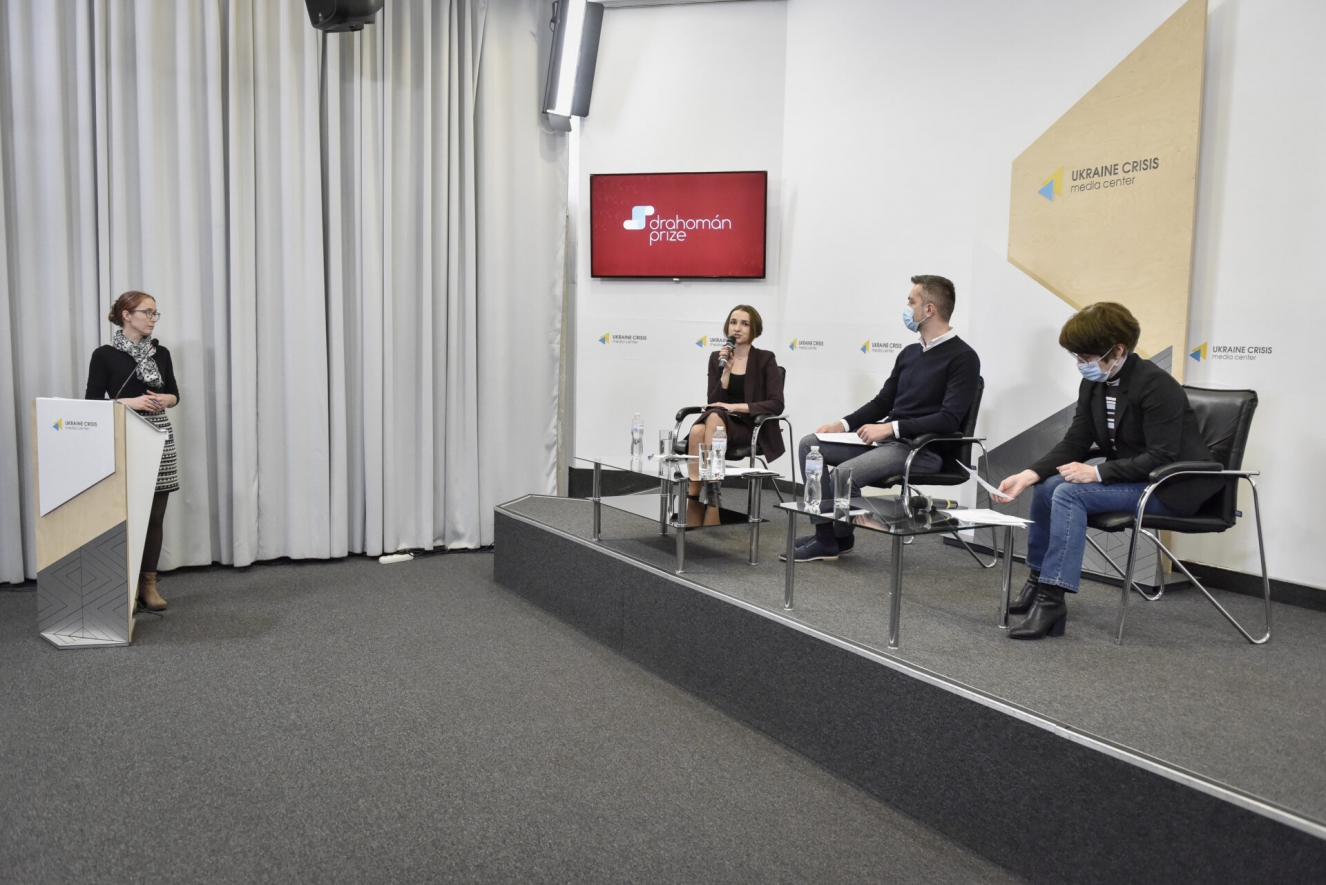 Participants of the press conference for announcing the shortlisted candidates for the Drahomán Prize: General Director of the Ukrainian Institute Volodymyr Sheiko, Executive Director of PEN Ukraine Tetyana Teren, and Manager of book and intellectual projects at the French Institute in Ukraine Valentyna Stukalova. The event was moderated by literary scholar, journalist and essayist Tetyana Ogarkova. “A translator is an important figure in cultural diplomacy, so it’s natural that the Ukrainian Institute became the co-founder of the Drahomán Prize. The name of the Prize was not chosen at random, for throughout history dragomans were translators and interpreters of diplomatic missions. Ukraine’s cultural presence in the world cannot be full-fledged without qualified translators and quality translations. Thus, this award celebrates not only their excellence but also the contribution to Ukraine being better known and understood abroad,” said General Director of the Ukrainian Institute Volodymyr Sheiko.

It is worth noting that this year the long list of candidates for the Drahomán Prize has comprised 27 translators, who translate from Ukrainian English, Polish, German, Italian, French, Portuguese, Czech, Serbian, Bulgarian, Macedonian, Greek and Arab.

Such a broad geographical scope of the contest was somewhat induced by the Translate Ukraine grant program, implemented in 2020 by the Ukrainian Book Institute. It resulted in 53 translations from Ukrainian into 21 languages (English, German, Italian, French, Slovak, Polish, Arabic, Hebrew, Mongolian, Macedonian, and others) in 24 countries across the world. Much like the Drahomán Prize, the Translate Ukraine program expands the borders of Ukrainian literature and makes Ukrainian authors recognizable abroad. “This year the Prize Jury has faced a challenging task,” said PEN Ukraine Executive Director and Coordinator of the Prize Jury Tetyana Teren. “Recently, we’ve witnessed an emergence of a large circle of professional translators working from Ukrainian into other languages worthy of an award from Ukraine. So it’s obvious that in the coming years, too, we will receive plenty of submissions for the Prize. Throughout the 30 years of Independence, these people have not only promoted Ukrainian literature but told the world about Ukraine in such a way – unfortunately, usually on a voluntary basis. The Drahomán Prize is first of all an opportunity to thank on behalf of Ukraine each and every translator in our long list of candidates for their significant selfless work.”

Moreover, during the conference it was informed that, apart from the winner of the Prize, the holder of the Jury’s Special Honor will be selected this year. Their names will be announced at the awards ceremony on April 23 that will take place in Kyiv.

The Drahomán Prize winner will receive a 2,000 EUR cash prize (taxes included). The Ukrainian Institute and the Ukrainian Book Institute will also provide professional opportunities and promote the laureate’s work (translation residencies and participation in international fairs and festivals). 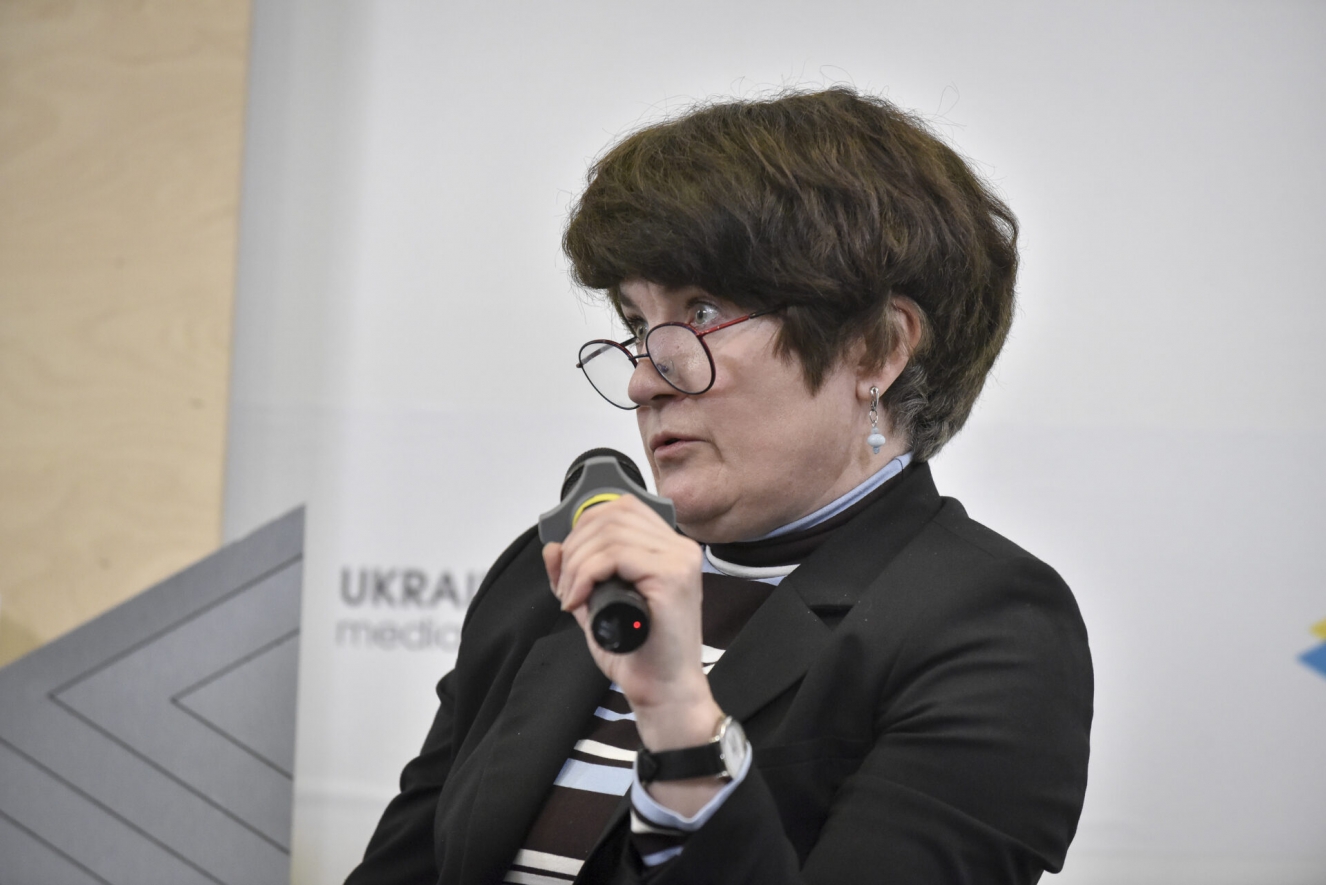 The Ukrainian Institute is a public institution affiliated with the Ministry of Foreign Affairs of Ukraine. Our mission is to strengthen Ukraine's international standing through the means of cultural diplomacy. We facilitate international connections between people and institutions and create opportunities for Ukraine to interact and cooperate with the world.

PEN Ukraine is a cultural and human rights NGO uniting Ukrainian intellectuals – writers, journalists, scholars, publishers, translators, human rights defenders, cultural managers. With 130 members, it is one of 146 national centers of PEN International. It is a co-founder of the Vasyl Stus Prize, the Yuri Shevelov Prize, and the George Gongadze Prize.

The Ukrainian Book Institute is a government entity affiliated with the Ministry of Culture and Information Policy of Ukraine. Its mission is to develop state policy in the book sector, promote reading in Ukraine, support book publishing, encourage translation activity, and popularize Ukrainian literature abroad.

December 8, 2020
1192
The long list for the 2020 Drahomán Prize has been announced
September 17, 2020
315
On September 24 we are presenting a new award the Drahoman Prize for translators from the Ukrainian into foreign languages
April 30, 2020
1406
International project “Peace and War” dedicated to the 75th anniversary of the end of World War II in Europe
April 29, 2020
212
Freed Ukrainian journalists challenge colleagues worldwide to help imprisoned Crimean civic journalists
February 17, 2020
362
PEN Ukraine selected winners in the contest for translation of Stanislav Aseyev’s book into foreign languages
Support our work