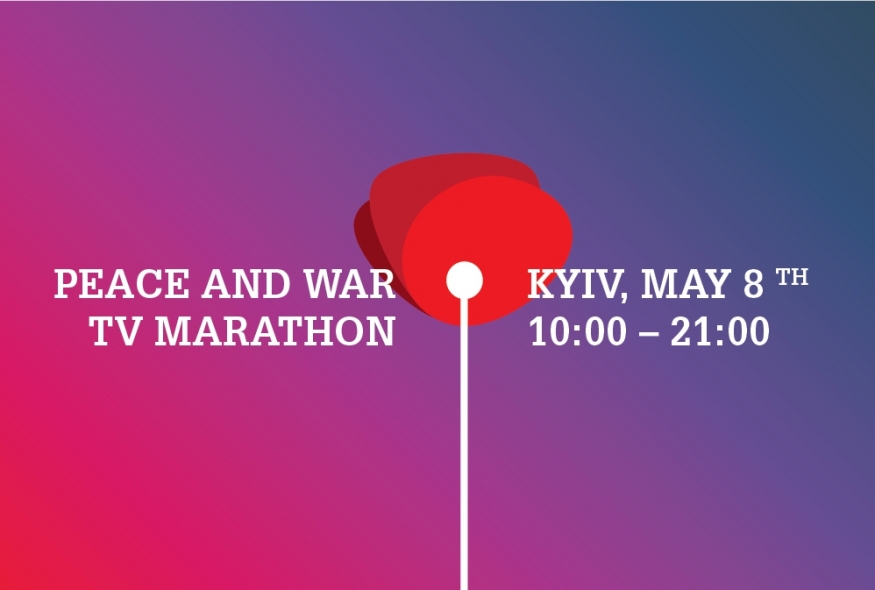 On the Day of Memory and Reconciliation, PEN Ukraine and National University of Kyiv-Mohyla Academy organize an international project "War and Peace" dedicated to the 75th anniversary of the end of World War II in Europe.

Watch the intellectual TV marathon on 8th of May from 10:00 to 21:00 live on Ukrainian TV channels Pryamiy, Espreso and 5 channel.

Facebook-event of the TV marathon

Ukrainian and foreign intellectuals are going live to discuss the contemporary views on World War II, democracy and totalitarianism, memory of war, and challenges for Europe nowadays.

What is the role of the narrative about World War II in the spread of democratic values? Which events of 1939–1945 may serve as a lesson for the contemporary world fighting against the coronavirus pandemic and opposing new military challenges? Why totalitarianism and dictatorship may under no circumstances be salvation for humanity? Ample analysis, open archives and unrestrained discussion is the way to seek answers to these questions and comprehend the events of World War II.

Rafał Wnuk, a Polish historian, researcher of the twentieth century in Polish history, co-author of the concept of the Museum of World War II in Gdańsk.

Emanuelis Zingeris, a Lithuanian public person and politician, Vice President of the Parliamentary Assembly of the Council of Europe (2011-2012), currently serving as a Member of the Seimas of the Republic of Lithuania and Chairman of its foreign affairs committee, Chairman of the International Commission for the Evaluation of the Crimes of the Nazi and Soviet Occupation Regimes in Lithuania, and President of the Parliamentary Forum of the Community of Democracies.

Olena Styazhkina, a Ukrainian historian, writer, senior researcher at the Institute of History of Ukraine of the National Academy of Sciences of Ukraine, the founder of the public movement "De-occupation. Return. Education". She is the author of books "A Person in the Soviet Province: Mastering the Discourse and its Rejection", "Stigma occupation: Soviet self-perception of women in the 1940s".

Serhii Plokhii, a Ukrainian and American historian, professor of Ukrainian history at Harvard University, where he also serves as the director of the Harvard Ukrainian Research Institute, laureate of the Shevchenko National Prize. He is the author of books Ukraine and Russia: Representations of the Past, Yalta: The Price of Peace and The Last Empire, Forgotten Bastards of the Eastern Front: American Airmen behind the Soviet Lines and the Collapse of the Grand Alliance and others.

Leonid Finberg, a Ukrainian sociologist, head of the Center for Studies of the East European Jewish Culture and History of the National University of Kyiv-Mohyla Academy, Editor-in-chief of publishing house "Dukh i Litera".

Ola Hnatiuk, a historian, literary scholar, renowned polish researcher in Ukrainian studies, professor at NaUKMA and the University of Warsaw. The author of books Farewell to Empire: Ukrainian Debates on Identity, Courage and fear and others.

Karl Schlögel, a German historian, Professor Emeritus of European University Viadrina Frankfurt (Oder), author of booksThe Soviet Century: Archeology of a Lost World; Moscow 1937 and In Space We Read Time: On the History of Civilization and Geopolitics (i.a).

Serhiy Zhadan, a Ukrainian writer, poet, translator and public figure. Laureate of the Vasyl Stus Prize. Zhadan is the lead vocalist of Mannerheim Line and Zhadan and Dogs bands.He is the author of poetry collections, novels Depeche Mode, Voroshylovhrad, Mesopotamia and The Boarding School ('Internat’) and others.

Iryna Tsilyk, a Ukrainian filmmaker and writer. She is the author of several books (poetry, prose, children’s books). The winner of the "Best Director" award for the documentary film "The Earth Is Blue As an Orange" at 2020 Sundance Film Festival (World Documentary Competition).

Victoria Amelina, a Ukrainian writer. Her novel won the Best Prose Book award at Zaporizhya Book Festival (Zaporizka Toloka) and was short-listed for Litakcent award among five best books of 2017.

Akhtem Seitablayev, a Crimean Tatar actor, screenwriter, and film director based in Ukraine. Head of The Crimean House. He is the director of several high-profile films, including Haytarma, Another's Prayer and Cyborgs: Heroes Never Die.

Anders Fogh Rasmussen, a Danish politician and the 12th Secretary General of NATO

Kurt Volker, an American diplomat, who served as the U.S. Ambassador to NATO (2008—2009) and served as executive director of the McCain Institute for International Leadership (since 2011). He worked also as the U.S. Special Representative for Ukraine (2017—2019).

Petro Poroshenko, a Ukrainian politician who served as the fifth President of Ukraine from 2014 to 2019. Deputy of the Verkhovna Rada of Ukraine.

Mykola Riabchuk, honorary president of the Ukrainian PEN Centre, Сhairman of the organizing committee of the project Peace and War:

'The monopolized and mystified history of World War II has become a powerful means of the Kremlin propaganda. The 75th anniversary of its end provided the Kremlin with an excellent opportunity for new informational special operations. Their victim is not only the historical truth, but the mind and conscience of millions of people – in Russia and beyond. We are looking for an answer. It cannot be symmetrical: we have neither those propagandistic resources the Kremlin possesses, nor that cynicism and brazenness, that "hutzpa" it demonstrates invariably – in both international and domestic relations. We can only answer with truth, as pathetic and, probably, naive as it may sound. This is not just about the facts, for overall they are generally known or at least public. This is also about the depth of their interpretation, the breadth of understanding, the comprehensive contextualization and relevance. Our answer is not a military parade and not rattling of propagandistic stamps, but a solemn analysis of World War II and all of its implications for our region'