About
Awards
Projects
News
Publications
Freedom of speech
Events
Opportunities
Autors
Tags
Home|News|Russian Crimes Against Media in Ukraine: an event in solidarity with journalists in the war took place in the center of Lviv
Freedom of speech #Solidarity#War 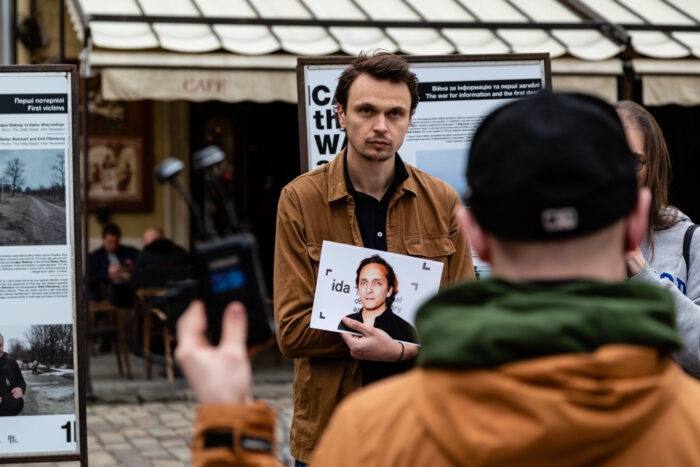 On March 31, at 32 Rynok Square in Lviv, an exhibition opened titled, "Call the War a War: Russian Crimes against Media in Ukraine since February 24, 2022." The project calls for sharing stories about journalists who have died, been taken prisoner, or persecuted as a result of the full-scale war being waged by Russia against Ukraine. It is a reminder and a call for the international journalistic community to describe Russia's war against Ukraine as a war, not a "crisis," a "conflict," or a "military operation."

The exhibition opened in Lviv, the city where several hundred representatives of the Ukrainian and foreign media now work. It consists of 10 exhibits, each of which tells the story of crimes committed by Russia against journalists. The banners feature photos and stories of journalists who have died in the line of duty, those serving in the Ukrainian Armed Forces, as well as those who have been injured as a result of Russian shelling, been abducted, or taken prisoner.

Many of these stories were told during the opening ceremony of the exhibition. It was hosted by Tetyana Teren, Executive Director of the Ukrainian Centre of PEN International (or PEN Ukraine), and Maksym Sytnikov, Human Rights Project Manager of PEN Ukraine. 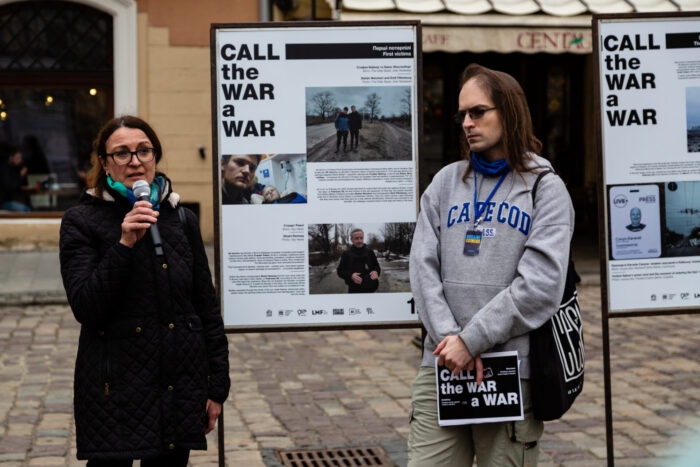 The opening ceremony was attended by friends and colleagues of the journalists who have died, been injured, been captured, or have gone missing since the beginning of Russia's full-scale invasion of Ukraine. Political scientist Mykola Davydiuk shared the story of deceased American journalist Brent Renaud. 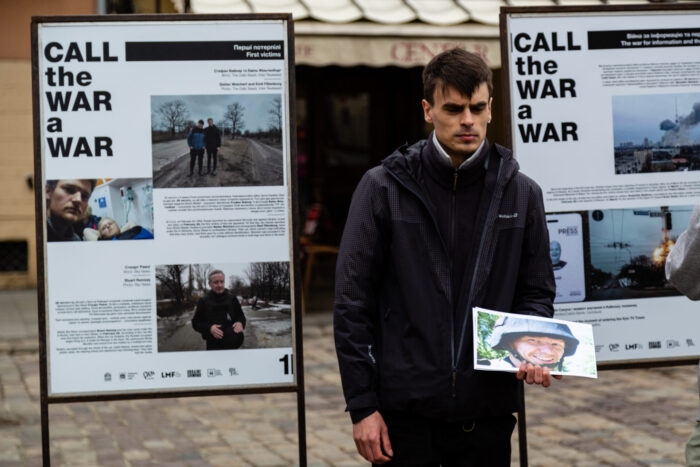 "Many of my colleagues are working in hotspots to show that what is happening in Ukraine is not a war with Putin. It is a war with Russia. I hope that the number of photos we are now holding in our hands will stop increasing, just as I hope that the number of Ukrainians killed will stop increasing. Just recently, we were at the funeral of a colleague who put down his camera to take up arms in order to protect his land and his people. We are not just Ukrainian journalists on the front or at the rear. We are citizens of Ukraine. This is where the difference lies: this is what passes through our hearts today. This is what hurts so much." 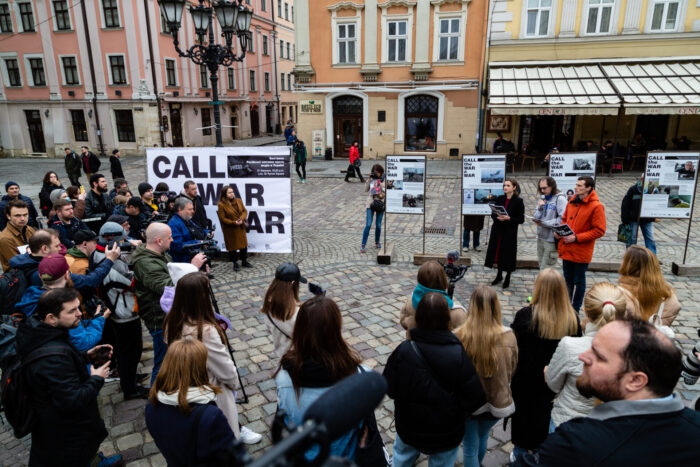 General producer of Ukrainian Radio and member of the Public Broadcasting Company of Ukraine Supervisory Board Dmytro Khorkin spoke about the death of cameraman Yevhen Sakun during a missile strike on the Kyiv TV Tower at Dorohozhychi, as well as about the conditions in which Ukrainian Public Broadcasting currently operates. The story of Hromadske journalist Victoria Roschina, who was released from captivity by Russian occupiers, was shared by her colleague Mariana Pietsukh. Photojournalist Stas Kozlyuk spoke about his missing colleague, photojournalist Max Levin.

"I don't think ballistic missiles or military aircraft are used during a crisis, a military conflict, or any other word that could be used to replace the word ‘war.’ This is nonsense. In Kharkiv, I watched the shelling of a TV tower. The most horrifying sound I've ever heard was the sound of a plane dropping a bomb. That is why I am very much asking my foreign colleagues to call things by their names. Right now, it is important for us."

The exhibition will continue until April 4. The event was supported by the Ukrainian Centre of PEN International, the Lviv Media Forum, the Institute of Mass Information, Ukraine Media Center, the Lviv City Council, and the George Gongadze Prize. The organizers stressed: the world must realize that Russia is an aggressor. Therefore, it is critical for foreign journalists and the media to speak correctly about war crimes against Ukraine. 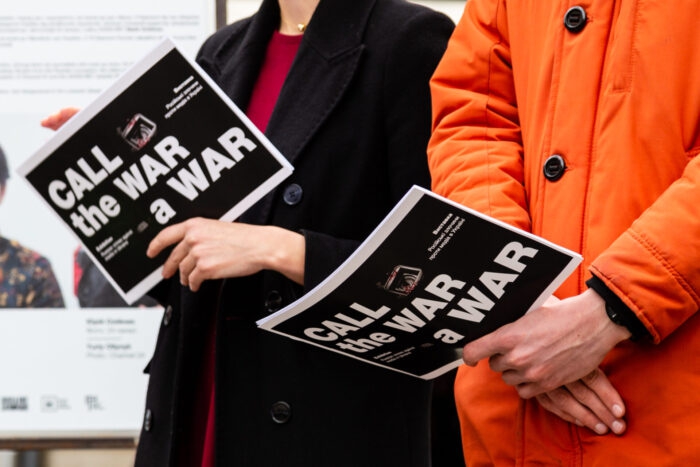 "The war being waged by Russia against Ukraine has an information aspect: in addition to bombs and rockets, this aggressor uses disinformation, fakes, and manipulation in both domestic and international communications. Unfortunately, much of the foreign media has yet to realize how important words are in this war. They continue to use terms such as ‘crisis,’ ‘conflict,’ or ‘military operation’ in their stories. These words not only contradict UN resolutions, but they show a lack of respect for the memories of fellow journalists who have died in Russia's war against Ukraine as well as those who continue to deliver the truth about the crimes of Russian occupiers despite risks to their own lives. For those reasons, we call on all foreign journalists to say the truth— call this war a war."

"In Russia's war against Ukraine, journalists have become just as important a target as the Ukrainian military. Because war crimes love silence, and silent witnesses do not pose a threat. Because photos from the front lines often speak louder than official battlefield reports. The truth about Russia's crimes against humanity, the truth about Kharkiv, Kherson, or Mariupol is terrible, just as the price journalists often have to pay to tell it is terrible. This truth is not something abstract. It is vital information for those who are in danger. It is evidence of Russian crimes for international courts. It is the hope of the world that evil will be stopped and punished."

Oksana Romaniuk, Executive Director of the Institute of Mass Information: 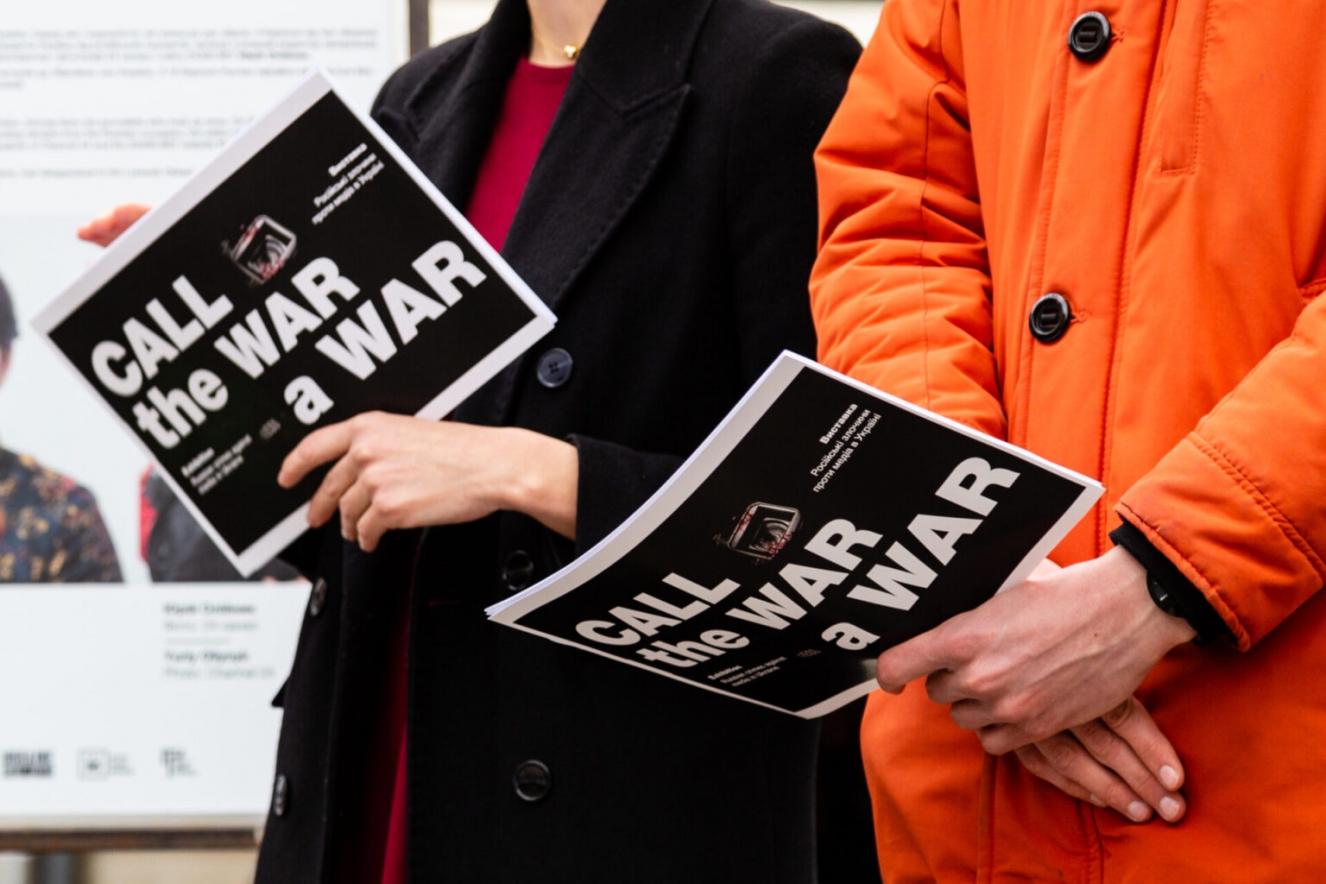 As of March 31st, five journalists had died while carrying out professional duties in Ukraine, nine had been wounded, two had gone missing and at least two were being held prisoner. Three more gave their lives defending Ukraine in the country’s Armed Forces. Two died as civilians.

March 31, 2022
509
Ukrainian presence at the London Book Fair under the motto 'russia's war on Ukraine is not fiction but time to act’
March 18, 2022
982
On Dialogue While Bombs Are Falling: PEN Ukraine Addressed the Global Intellectual Community
March 10, 2022
488
Russian occupants sentenced Remzi Bekirov to 19 years of imprisonment
March 7, 2022
705
PEN launches page with latest news and materials on Russia's war against Ukraine
March 6, 2022
571
Lviv journalist Victor Dudar died in a battle near Mykolaiv
Support our work