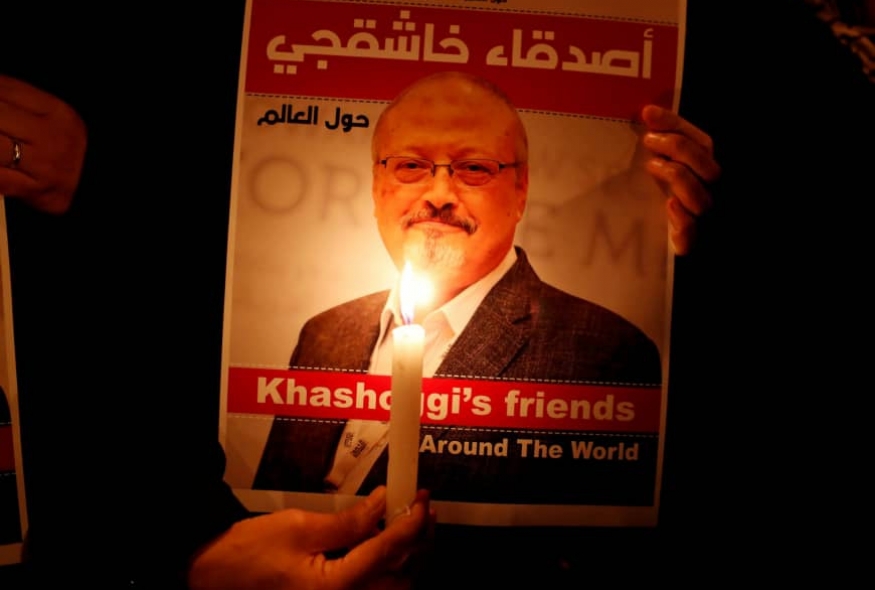 A demonstrator holds a poster with a picture of Saudi journalist Jamal Khashoggi outside the Saudi Consulate in Istanbul Oct. 25. | REUTERS

NEW YORK (Reuters) - The number of journalists killed around the world in reprisal for their work nearly doubled in 2018 to at least 34 people, reflecting an increase in deliberate attacks on journalists in Afghanistan, according to a report released on Wednesday.

That was up sharply from 18 murdered for their work in 2017, according to the Committee to Protect Journalists.

The jump this year reflects 10 reporters killed in Afghanistan, as well as four journalists slain in a June attack at Maryland’s Capital Gazette newspaper.

Overall, some 53 journalists died on the job worldwide from Jan. 1 through Dec. 14 – including those killed inadvertently in combat or on other dangerous assignments – a 13 percent increase from 47 deaths in 2017, said CPJ, a U.S. nonprofit that promotes press freedom.

CPJ cited insufficient international standards for journalists’ rights as another reason for the uptick in murders.

The report criticized U.S. President Donald Trump’s refusal to blame the crown prince of Saudi Arabia for the murder of Washington Post columnist Jamal Khashoggi, despite a CIA assessment that the prince had ordered the killing. The CPJ said Trump’s stand signaled a dangerous lack of leadership in the protection of journalists.

The spike includes the deadliest attack on the U.S. media in recent history, when a gunman who had filed a failed defamation lawsuit against the Capital Gazette newspaper in Maryland killed four journalists and a sales associate in June.

CPJ included the four slain journalists in its total of 34 reporters murdered during the year. The slain sales associate factored into a separate tally of seven media support workers who died on the job in 2018, down from eight in 2017.

Sixty-two percent of the journalists killed covered politics, which the report deemed the most dangerous beat.

Last week, CPJ reported that a near-record number of journalists around the world are in prison this year because of their work, including two Reuters reporters in Myanmar.

Khashoggi, the reporters at the Capital Gazette, and the imprisoned Reuters’ journalists Wa Lone and Kyaw Soe Oo were featured last week in Time Magazine’s Person of the Year issue, honoring "The Guardians and the War on Truth."