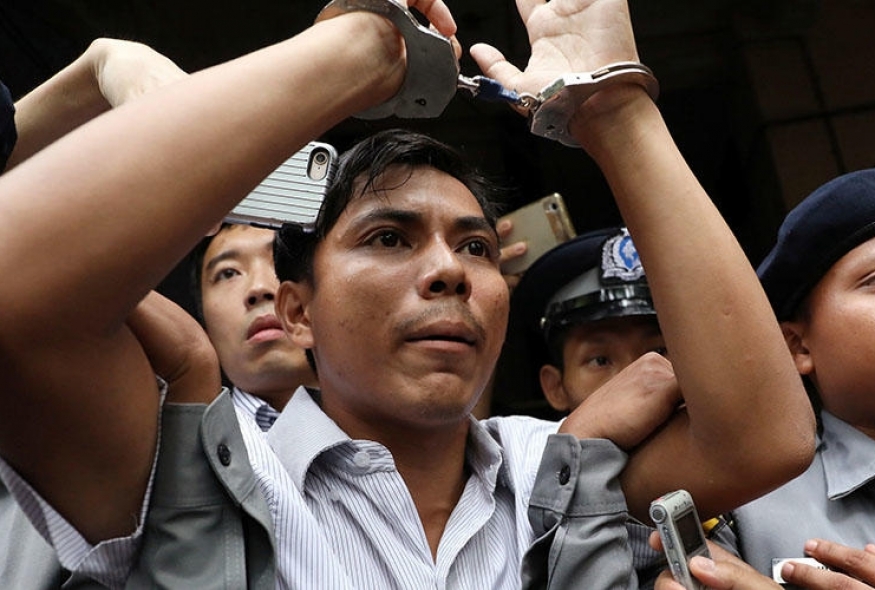 For the third year in a row, 251 or more journalists are jailed around the world, suggesting the authoritarian approach to critical news coverage is more than a temporary spike. China, Egypt, and Saudi Arabia imprisoned more journalists than last year, and Turkey remained the world’s worst jailer. 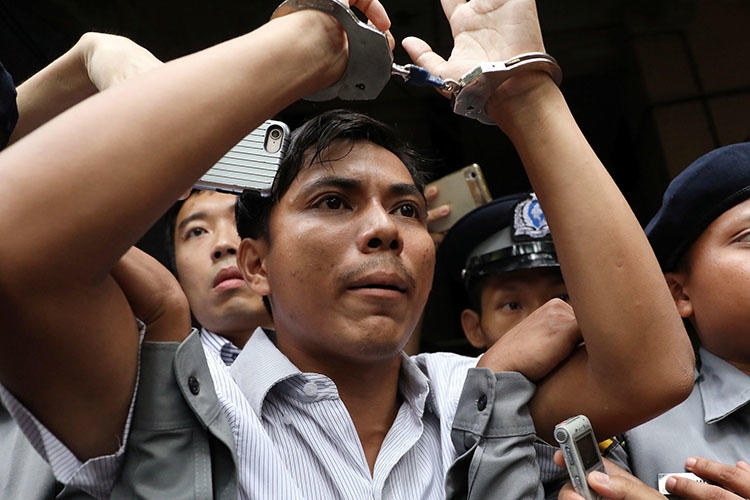 Reuters journalist Kyaw Soe Oo is led handcuffed from a court in Yangon in September. He and colleague Wa Lone are serving seven-year prison sentences in Myanmar. (Reuters/Ann Wang)

Fresh waves of repression in China, Egypt, and Saudi Arabia sustained the global crackdown on press freedom in 2018 for the third consecutive year. In its annual global survey, the Committee to Protect Journalists found at least 251 journalists in jail in relation to their work, as Turkey--still the world’s worst jailer of journalists--released a small number.

The past three years have recorded the highest number of jailed journalists since CPJ began keeping track, with consecutive records set in 2016 and 2017. Turkey, China, and Egypt were responsible for more than half of those jailed around the world for the third year in a row.

The majority of those imprisoned globally--70 percent--are facing anti-state charges such as belonging to or aiding groups deemed by authorities as terrorist organizations. The number imprisoned on charges of false news rose to 28 globally, compared with nine just two years ago. Egypt jailed the most journalists on false news charges with 19, followed by Cameroon with four, Rwanda with three, and one each in China and Morocco. The increase comes amid heightened global rhetoric about "fake news," of which U.S. President Donald Trump is the leading voice.

The higher number of prisoners in China--with 47 behind bars--reflects the latest wave of persecution of the Uighur ethnic minority in the Xinjiang region. At least 10 journalists in China were detained without charge, all of them in Xinjiang, where the United Nations has accused Beijing of mass surveillance and detention of up to a million people without trial.

In the highest-profile example, Lu Guang, a freelance photographer and U.S. resident whose work on environmental and social issues in China has won awards from the World Press Photo Foundation and National Geographic, disappeared in Xinjiang in early November. Authorities later confirmed his arrest to his family, but have not disclosed his location or reason for detaining him.

More broadly, President Xi Jinping has steadily increased his grip on power since taking office in 2013; this year, authorities stepped up regulation of technology that can bypass the country's infamous firewall, issued lists "of "approved" news outlets, and disbarred lawyers who represent jailed journalists, CPJ has found. While President Trump has continually pressed Beijing over its trade and technology practices, human rights--such as press freedom and the crackdown in Xinjiang--have not figured into the headlines.

In Egypt, at least 25 journalists are in prison as the administration of President Abdel Fattah el-Sisi has increasingly arrested journalists and added them to existing mass trials. Mohamed Ibrahim, a blogger known as "Mohamed Oxygen" who covered allegations of election irregularities and police abuse, is one of more than 40 defendants in one case charged with false news and being members of a banned group. National security prosecutors have repeatedly renewed Mohamed Oxygen’s 15-day pretrial detention since his April arrest.

Even after trial, Egyptian authorities go to transparently ridiculous lengths to keep critical journalists behind bars. Photojournalist Mahmoud Abou Zeid, known as Shawkan, has been in prison since August 14, 2013, when he was arrested covering clashes between Egyptian security forces and supporters of ousted President Mohamed Morsi. First, authorities held him for two years without charge; then they put him on trial for weapons possession, illegal assembly, murder, and attempted murder. On September 8, 2018, a court convicted Shawkan of murder and membership of a terrorist group and sentenced him to five years in prison—time he had already served. Now authorities are holding Shawkan for an additional six months for unpaid fines relating to unspecified damages during the 2013 protests, according to his lawyer. CPJ honored Shawkan with an International Press Freedom Award in 2016.

Saudi Arabia--under intense scrutiny for the murder of exiled, critical Washington Post columnist Jamal Khashoggi in its Istanbul consulate in October--stepped up its repression of journalists at home, with at least 16 journalists behind bars on December 1. The prisoners include four female journalists who wrote about women’s rights in the kingdom, including the ban on women driving that was lifted in June.

Even as Turkish President Recep Tayyip Erdoğan has been the fiercest critic of Saudi Arabia for the murder of Khashoggi, his government continued to jail more journalists than any other on the planet. CPJ found at least 68 journalists jailed for their work in Turkey, which is slightly lower than previous years. In the course of the year, dozens more have been jailed or released, as prosecutors continue to seek arrest warrants and apply new charges, and courts ordered some journalists released pending trial and acquitted others. For the third consecutive year, every journalist imprisoned in Turkey is facing anti-state charges.

Erdoğan began the crackdown before the 2016 failed coup attempt, but afterward intensified it, shutting down more than 100 news outlets by decree. Those on the periphery of the journalistic profession are also vulnerable. CPJ’s list of jailed journalists does not include 13 staff from Gün Printing House, including its owner, a security guard, and several machine operators, who were jailed. Their "crime" is evidently printing Özgürlükçü Demokrasi, a pro-Kurdish daily paper that the government took over and eventually shut down. Several journalists affiliated with the paper, who are included in the prison census, are detained on accusations of supporting the banned Kurdistan Workers' Party, or PKK. Dozens more in Turkey are accused of affiliation with PKK or with an alleged terror group run by exiled preacher Fethullah Gülen, which the government blames for the attempted coup. 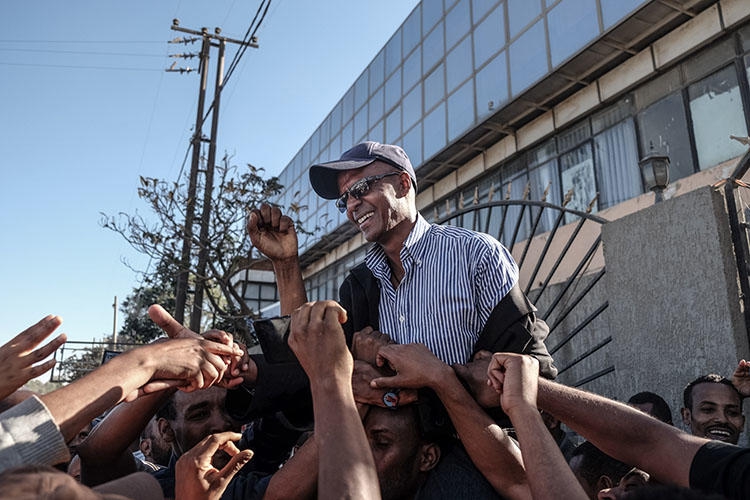 Ethiopian jounalist Eskinder Nega (C), who was given an 18-year prison sentence in 2012 on accusations of links to the banned Ginbot 7 group, reacts with people after being released from Kaliti Prison in Addis Ababa on February 14, 2018. - Ethiopia released a jailed opposition leader and journalist on February 14 and dropped charges against a group of bloggers in a wave of prisoner releases and pardons. (Photo by Yonas TADESSE / AFP)

Rounding out the top five worst jailers worldwide is Eritrea. With 16 journalists behind bars, Eritrea continues to imprison more journalists than any country in sub-Saharan Africa; Cameroon is next with seven. Most of the journalists imprisoned in Eritrea have been in custody since President Isaias Afwerki abruptly shut down the independent media in 2001, and it is unclear whether they are all alive. The lack of a breakthrough in Eritrean press freedom and other human rights is in contrast to neighboring Ethiopia; the two countries struck a peace deal in June after two decades of hostility, according to news reports. CPJ found no journalists jailed in relation to their work in Ethiopia for the first time since 2004.

Vietnam and Azerbaijan also imprisoned journalists in the double digits, with 11 and 10 jailed, respectively. However in Uzbekistan, CPJ found no journalists in jail for the first time in two decades. 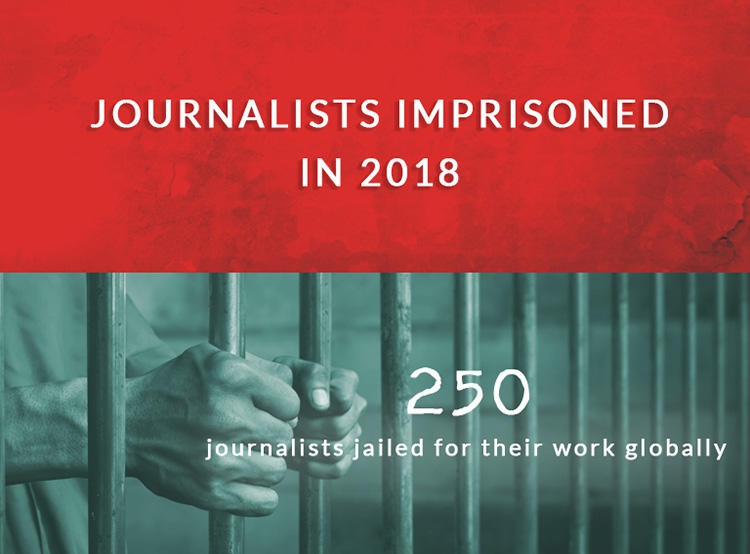 The number of journalists jailed in Syria fell in 2018, but only because authorities in 2018 admitted one of the seven detained there for years, freelance photojournalist Osama al-Habaly, had died in custody. Authorities this year also confirmed Niraz Saeed, a Palestinian-Syrian photojournalist, was executed in 2016 after three years' detention. Saeed was not included on CPJ’s previous census at the request of his family.

In the United States, where journalists encountered hostile rhetoric and fatal violence in 2018, no journalists were in jail on December 1, although nine were arrested in the course of the year, according to the U.S. Press Freedom Tracker, of which CPJ is a partner. Furthermore, over the past year and half, CPJ has documented or assisted in the cases of at least seven foreign journalists seeking asylum in the United States because of work-related threats at home, who were held in prolonged detention by U.S. Immigration and Customs Enforcement (ICE).

Venezuela was jailing the most journalists in the Americas, with three in prison on December 1, and in Brazil, a sports journalist was jailed for defamation.

Other findings from CPJ’s prison census include:

CPJ in 2018 found several cases of journalists who were jailed at the time of earlier surveys. These journalists appear for the first time on the 2018 census, because at the time of their arrests, the organization was either not aware of their incarceration or unable to connect it to journalism. As a result, the number of journalists imprisoned in 2017 has been adjusted in the database to 272.

The prison census accounts only for journalists in government custody and does not include those who have disappeared or are held captive by non-state actors. (These cases—including several journalists held by Houthi rebels in war-torn Yemen and a Ukrainian journalist held by pro-Russian separatists in Ukraine’s east —are classified as "missing" or "abducted.") CPJ estimates that dozens of journalists are missing or kidnapped in the Middle East and North Africa amid conflicts in Yemen, Syria, Iraq, and Libya.

CPJ defines journalists as people who cover the news or comment on public affairs in any media, including print, photographs, radio, television, and online. In its annual prison census, CPJ includes only those journalists who it has confirmed have been imprisoned in relation to their work.

CPJ believes that journalists should not be imprisoned for doing their jobs. In the past year, CPJ advocacy helped lead to the early release of at least 79 imprisoned journalists worldwide.

CPJ’s list is a snapshot of those incarcerated at 12:01 a.m. on December 1, 2018. It does not include the many journalists imprisoned and released throughout the year; accounts of those cases can be found at https://cpj.org. Journalists remain on CPJ’s list until the organization determines with reasonable certainty that they have been released or have died in custody.

Elana Beiser is editorial director of the Committee to Protect Journalists. She previously worked as an editor for Dow Jones Newswires and The Wall Street Journal in New York, London, Brussels, Singapore, and Hong Kong.