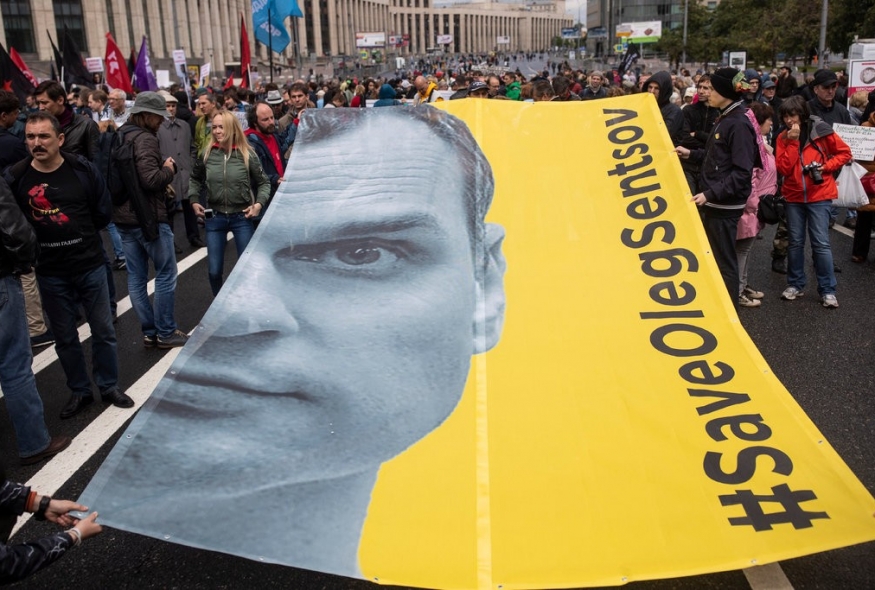 MOSCOW – A praised Ukrainian film director imprisoned in Russia has been turning down food for a month, attracting international support and creating an unwanted backdrop for Moscow as the World Cup is underway.

"Time is running out," the writer Stephen King tweeted in an appeal for the director on Friday, "and he may die for his views."

The director, Oleg Sentsov, is waging the hunger strike to protest the detention of his fellow Ukrainians.

Both sides in the four-year-old Russia-Ukraine conflict hold dozens of people deemed by the other to be political hostages.

The timing of Mr. Sentsov’s strike has also raised the grim prospect that his jailers could resort to force-feeding him.

Relatives of Mr. Sentsov had hoped he would be freed in a prisoner exchange before the soccer tournament began. Instead, the opening matches have coincided with the end of the first month of his strike – a time when Russian wardens have in the past begun force-feeding hunger strikers.

Mr. Sentsov, who has won recognition on the European film festival circuit, was living in Crimea when Russia annexed the peninsula from Ukraine in 2014. He became a prominent opponent of the annexation.

Russian prosecutors accused him of going beyond peaceful protest by setting fires and plotting to blow up a Lenin statue, and a court sentenced him to 20 years in prison.

Mr. Sentsov denies carrying out or planning violent acts. Russia says he is a Russian citizen because he lived in Crimea, which is now part of Russia. Mr. Sentsov says he is Ukrainian.

Mr. Sentsov, 41, is being held in a prison for hardened criminals, nicknamed the Polar Bear, in the Arctic town of Labytnangi.

The campaign to free Mr. Sentsov has picked up with the opening of the World Cup. The filmmakers Pedro Almodóvar and Wim Wenders are among those who have rallied to Mr. Sentsov’s cause.

On Wednesday, the day before the tournament began, the European Parliament passed a resolution demanding Mr. Sentsov’s release and calling him one of 70 Ukrainian "political prisoners" being held in Russia.

It is unclear whether the attention has helped the chances of Mr. Sentsov’s release.

President Vladimir V. Putin of Russia has played down the possibility of a swap that includes Mr. Sentsov. Earlier this month, he said Mr. Sentsov should not be traded for a Russian journalist held in Kiev, Ukraine’s capital, because the cases were not comparable.

On both sides, the prisoners’ fates have been tied up with the on-again-off-again diplomacy over ending the war, and exchanging detainees. Some type of swap had appeared imminent before the soccer tournament began; it was discussed last weekend in a telephone call between Mr. Putin and President Petro O. Poroshenko of Ukraine, the Kremlin said, though no prisoners have been freed.

Iryna Gerashchenko, a deputy speaker of the Ukrainian Parliament and negotiator for prisoner exchanges, has promoted a swap of 23 Russians held in Ukraine for an unspecified number of Ukrainian detainees in Russia, including Mr. Sentsov.

Mr. Sentsov’s supporters are concerned about his well-being. Hunger strikers have been handled roughly in Russian prisons over the years.

"A hunger strike is very dangerous," said Sergei I. Grigoryants, who served two terms in prison as a dissident in the 1970s and 1980s and was force-fed during hunger strikes.

At the time, Soviet prison guards restrained hunger strikers in a chair and used a funnel and tube to administer a mix of meat bouillon, boiled grains and raw egg, Mr. Grigoryants said.

"If a person is in a critical state, they could use such a form of force-feeding," Mr. Borshov said.

Lev Ponomaryov, director of For Human Rights, a Russian rights group, sent a letter to Mr. Sentsov last month imploring him to halt his hunger strike because of the risks of force-feeding.

"It is done in a rough manner, without the necessary medical oversight," Mr. Ponomaryov said. "Some survive, some do not."

June 6, 2018
186
OSCE Media Rep gets translation wrong & condemns Ukraine for attack on journalists critical of Babchenko ‘murder’
May 24, 2018
238
Global Sentsov Campaign Planned Ahead Of Russia World Cup
May 18, 2018
237
Jailed Ukrainian Filmmaker Determined To Carry Hunger Strike 'To The End'
May 17, 2018
201
From Crimea to Siberia: How Russia is Tormenting Political Prisoners Sentsov and Kolchenko
May 10, 2018
216
Enjoy the World Cup in Russia where you can get 20 years for opposing annexation of Crimea
Support our work